After Kareena, Alia Bhatt also says “Don’t like my films don’t watch them”, netizens react to her statement and ask to boycott Brahmastra.

After Kareena Kapoor, Alia Bhatt Says Don’t Like Me Don’t Watch Me

Bollywood actress Alia Bhatt who is currently gearing up for the release of her upcoming much-anticipated film Brahmastra recently opened up about facing trolls for being a star kid, she told Mid-Day, “I believed the only way I could shut the conversation down is through my movies. So, don’t respond, don’t feel bad. Of course, I felt bad. But feeling bad is a small price to pay for the work that you are respected and loved for. I delivered a film like Gangubai. So, who’s having the last laugh? At least until I deliver my next flop? For now, I am laughing!”

Adding to her conversation she said, “I can’t keep defending myself verbally. And if you don’t like me, don’t watch me. I can’t help it. That’s something I can’t do [anything about]. People have something to say. Hopefully, I will prove to them with my movies that I am actually worth the space I occupy.” She added, “What the hell is this nonsense? Why is this happening for no reason?”.

Reacting to her interview, a segment of netizens shared their reactions on social media, a Twitter user wrote, “Ok Alia ma’am We will fulfil your wish by #BoycottBramhastra”, “#Bollywood seems to be losing its mind because of #BoycottBollywood trend. As you wish dear @aliaa08.” Another user wrote, “We got a valid reason for #BoycottBrahmastra ty @aliaa08”.

On the other hand, Kamaal R. Khan also took a dig at Alia and wrote, “Alia Bhatt is very angry on public and she said- Don’t watch my film if you don’t like me. Thank you madam. We will honour ur advise. So #BoycottBrahmastra will rock.”

Take a look at netizens’ reactions to Alia Bhatt’s statement- 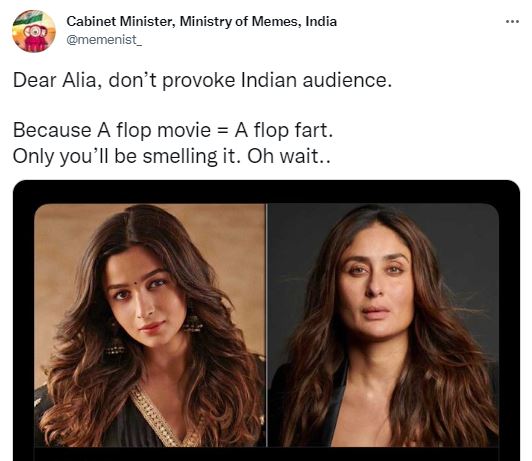 Earlier, actress Kareena Kapoor suffered a massive backlash for her statement in an interview, in which she can be seen talking about nepotism. She says, “don’t watch our movies, nobody has forced you.” She adds, “aap aarhe hon aa movie dekhne mat aao.” While now it is to be seen if Alia Bhatt’s statement will lead to the beginning of another boycott trend on social media.